Agent-Based Modeling with Python and ArcMap

I spent a few hours last week creating an agent-based model using Python and ESRI's ArcMap (GIS). I was inspired by a presentation I had seen last year based on a publication in the Philosophy of Science by Michael Weisberg and Ryan Muldoon.
Weisberg and Muldoon created an agent based model that compared the paths of discovery for two types of scientists: followers, and mavericks.  They wanted to identify which might be more efficient at making scientific discoveries, and create identify any interesting patterns of the "path of scientific progress" for either approach,
Basically they created an elevation layer with two peaks. The rise in elevation at a point indicated an increase of knowledge, or scientific knowledge. The peaks represented scientific discovery.

Here is a sample image of the elevation layers from their paper: 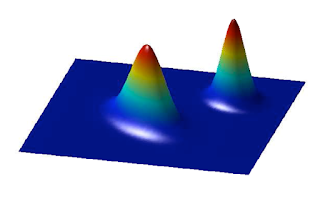 The second piece of the model added, were the "scientists." Several scientists were randomly distributed throughout the grid layer. Two different models were created in which the scientists used would all act one of two ways: they would either follow, or a maverick.
Each time a follower moved from one grid cell to the next, they "discovered" the value of that cell. Then they would look around at all 8 neighboring cells. From there followers would pick the highest value discovered when possible,
Mavericks behaved in the opposite fashion.  They would always first pick the unexplored cell if possible.   If all cells have been visited then they pick the highest value.
Weisberg and Muldoon discovered that within their model, the mavericks found the discoveries more efficiently, and more often than the followers.  When mixed with followers, mavericks also helped guide them more quickly to new areas of progress.
Here is another illustration from Weisberg and Muldoon's "Epistemic Landscapes and the Division of Cognitive Labor," It depicts (A) the paths created by a set of "followers" in the model from their starting point (B) toward the peaks:

I just spent a few hours last week creating a similar model. I did not create the layer of logic that would create decisions as complex as the mavericks or followers but I did create an agent based model in which a "scientist" would move around specific locations of a grid until it found the point of highest elevation. In place of complex decision making, I instead moved the scientist randomly among the neighboring cells. I also made sure that the agent would not backtrack a cell already traveled, nor would the scientist move off of they boundaries of the grid.

Here is an excerpt of my script, but the entire text can be downloaded (as a py file) HERE.

The final result of my model could consistently find the highest point of elevation, however you'll be able to see that the path was extremely inefficient.  The "scientist" explored nearly the entire grid in this example before finding the highest point.

Weisberg and Muldoon's paper, "Epistemic Landscapes and the Division of Cognitive Labor," published in the journal of Philosophy of Science, can be found HERE.