Street Sections show scale, activity and the types of activity you might see on a street. I've been making a few of these using Auto CAD and Illustrator.  The section below was one of the first ones that I learned to make. Just sticking with plain black and white, and simple images can yield some pretty effective results.This section was created based on a sketch, some simple standard dimensional estimates, and a basic understanding of CAD and Illustrator.

The location of the sketch below is from a stretch of East Market Street, Philadelphia. 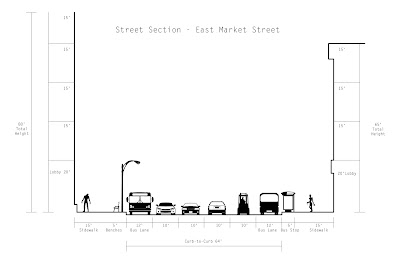 As time went on I incorporated more details and tools from Adobe creative suite to create another section for a studio project pictured below. This section was created for a proposed industrial section in Mumbai, India. The area was intended to blend vital infrastructure for the Island City area, while incorporated public access similar to Deer Island, Massachusetts.

Personally, I think this example has too much detail as a section, which takes away from the real information that its trying to convey.  However I think it fit within the context of the style of work we were publishing.

I think the first example, although simple, better conveys the dimensions and components of the street, as well as the edges. On the other hand, it could use a little bit of color and life.  The example below however was a great opportunity to learn as many options as possible in AutoCAD, Photoshop, Illustrator, and InDesign. 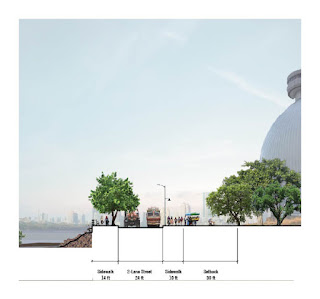 As one continue to work on sections more and more, everyone eventually develops a style of their own. Personally I think I prefer something that leans more simplistic.  I've dug up another example, which I made very early on from a sketch of the pedestrian street, St. Albans Place in Philadelphia. (It was also one of the filming locations for the Sixth Sense.) I would probably change several of the details such as the labeling, but I think overall I like the basic black line work, with just a little color and life. 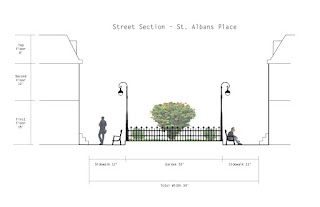 Hopefully I'll have the chance to do some more on occasion in my career.

(I'd like to point out that none of these examples include bike lanes. Two of these sections were based on sketches of existing roads. The following section coming up was based on an industrial area proposed in Mumbai, which likely a special exception in the world when it comes to planning for bikes.)